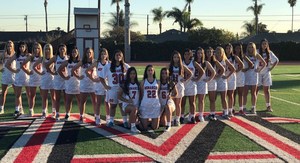 No. 2 Mater Dei Monarchs fought off a determined effort from No. 7 San Clemente to advance to Saturday’s semi-finals.  With the 7-5 win, the Monarchs will continue their pursuit of a third straight Section Championship.

Mater Dei almost met their match against the rabid underdogs from San Clemente.  After taking early control and earning a not-quite-comfortable 5-1 halftime lead, the Monarchs had to hold off a second-half comeback led by San Clemente junior Delainey Iles.

San Clemente came into the match looking to control the ball with long offensive possessions and keep it out of the potent Mater Dei sticks.  On the other end, the visiting Tritons locked down their own 8-meter area with their signature zone defense.

The San Clemente defense, which was backstopped by goalie Kennedy Kingsmill, “absolutely played out of their minds,” according to coach Josh Cain.  Without captain Shay Hefft, who was out for a double-yellow from the first round, San Clemente was within a point with three minutes to go in the game.

Meanwhile, as Mater Dei fought to earn every point, their defense also flexed its muscles to keep the Triton attack at bay.  It was 20 minutes into the game before San Clemente got on the board with a goal from sophomore Paige Campbell.  And while the Monarchs were able to recover from its mistakes, the home team punished San Clemente for theirs.  In the first half, five different Monarchs netted goals: Georgia Glowaki, Gianna Danese, Jamie Ko, Peyton Smith, and Anna Rolfes.

The second half was a reversal of the first, as the Tritons outpaced Mater Dei 4-1 over the first 22 minutes.  During this time, San Clemente goals came from Tess Jonas and Campbell, with two from captain Jessica De Collibus. Mater Dei captain Tess Keiserscored her team’s only goal in that interval.

With three minutes left in the game, San Clemente gained control in their defensive end.  Down by one goal, 6-5, their patient offense would have plenty of time to build a good scoring opportunity.  However, when the Tritons dropped the ball on the clear, Danese pounced, took the ball to the cage, and locked up the 7-5 Monarch victory.

Mater Dei Coach Cressita Bowman was impressed with what she saw from Danese: “Gianna played great, created turnovers, and kept the energy up” for a team who would celebrate their victory by hitting the showers and heading to prom.

Mater Dei will face Foothill in the OC Semifinal.

https://www.maxlaxoc.com/mater-dei-slips-by-a-dangerous-san-clemente-in-defensive-battle/ Source: By Matt Armstrong - May 4, 2018