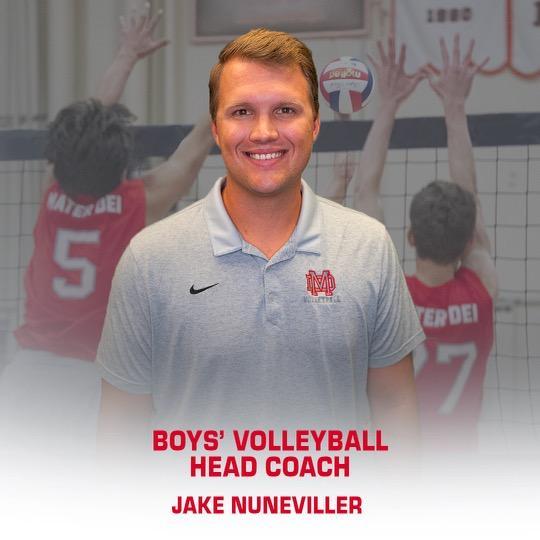 Coach Jake Nuneviller enters his fifth season with the Mater Dei Boys Volleyball Program. A native of Arizona, Jake was born into a family that was all about volleyball. His mother coached D1 volleyball at the University of Arkansas, his father played professional beach volleyball, and his little sister is an All-American currently playing at the University of Oregon. Coach Jake was a first-team all-state setter at Corona Del Sol High and then went on to Golden West College to win a state championship.

Coach Jake Nuneviller has ten years of coaching experience and has been playing for 16 years. At The HBC, his teams both won a silver and a Bronze medal at the USAV Junior National Championships in the 18s division. He has had several players go on to play D1 volleyball some of whom were recently selected to the NCAA All-American team and one Olympian. Returning to Arizona, he coached at Aspire VBC and won another silver medal at the boys Junior Nationals Championships in the 17s division. He also coached Arizona’s Desert Vista High School where his team finished 5th in the state.

Coach Jake Nuneviller is looking forward to another great year at Mater Dei. 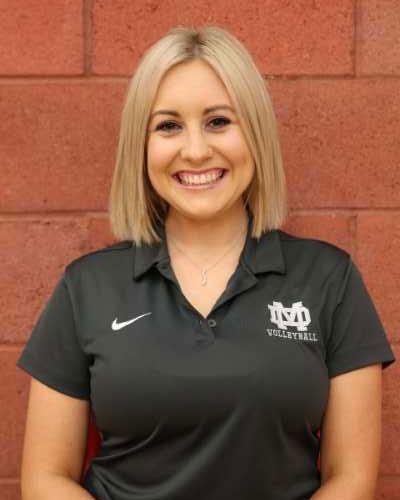 Shelby Griffith begins her fourth season at Mater Dei. Coach Griffith graduated from El Modena High School where she was a Varsity captain and team MVP. In her Junior year, Shelby was selected first-team All-League and by her senior year second-team All-CIF. Collegiately, Shelby played at Irvine Valley College where she was named an All-Conference Libero. While playing for the Lasers, she was 2nd in the conference for digs per set for the overall season. Coach Griffith graduated with an AA Degree and is currently completing coursework toward a nursing degree.

Shelby has been coaching volleyball for six years. Coach Griffith began her career as an assistant coach at Aspire Volleyball Club. Last season her boys team finished in the top 10 at Junior Nationals. Coach Griffith also served as the Junior Varsity Coach and Assistant Varsity Coach at Yorba Linda High School winning a league championship. Currently, Shelby serves as the Junior Varsity and Assistant Varsity Coach at Marina High School for the women’s program. Coach Griffith is excited to help build the Mater Dei program with her love and knowledge of the game and continue to develop players. 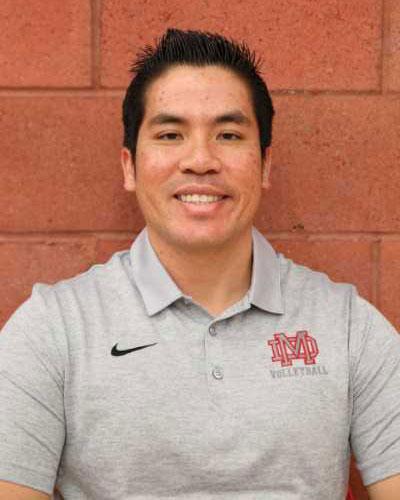 Michael Nguyen has acquired a broad range of volleyball experience as a player, certified official, and coach. Coach Nguyen graduated from Loara High School where he played four years of volleyball. While at Loara, Nguyen played as an outside hitter where he earned the recognition as All-Empire League Player and overall Varsity Team MVP during his Junior and Senior years. After graduating, Nguyen attended Golden West College where he was an All-Pacific Conference Libero.  After Golden West, he pursued an Associate degree in Fire Science and became a Vet Technician for several years.

Of all the schools that Coach Nguyen has been with, he has succeeded in winning multiple league titles. From 2011-2019, Nguyen coached at the Ohana Athletic Club for the Boy's and Girl's Teams and was the Club Director. Coach Nguyen currently coaches at Pulse Athletics Volleyball Club and has loved coaching there these past years.  Coach Nguyen has been coaching at Mater Dei for the boys’ volleyball team since 2014 and continues to help build this program and has won numerous Trinity League titles.  Michael Nguyen’s favorite hobby outside of volleyball is hiking and spending time with his wife Helen. 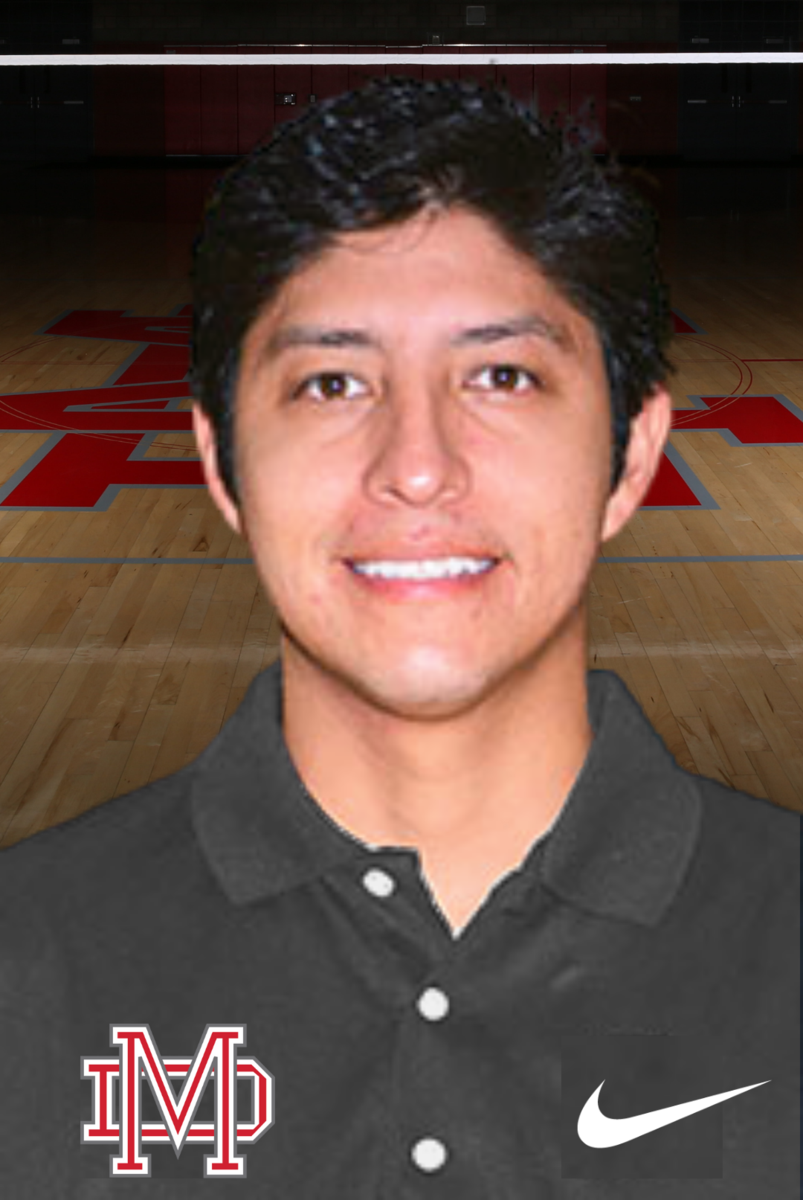 At HBHS he led his team to an undefeated league season 2012, garnered First-Team All-League and County, Co-MVP of Sunset League and named to the 2012 Volleyball Magazine Fab 50 list. Coach Edgar played as Outside Hitter and Libero at CSU Long Beach. During his time at Long Beach, he had two appearances in the MPSF championships as well as an appearance in the NCAA Final Four in his senior year.

Coach Edgar is excited to join the Mater Dei Boys Volleyball coaching staff as well as to bring his experiences and knowledge to the program and the players. 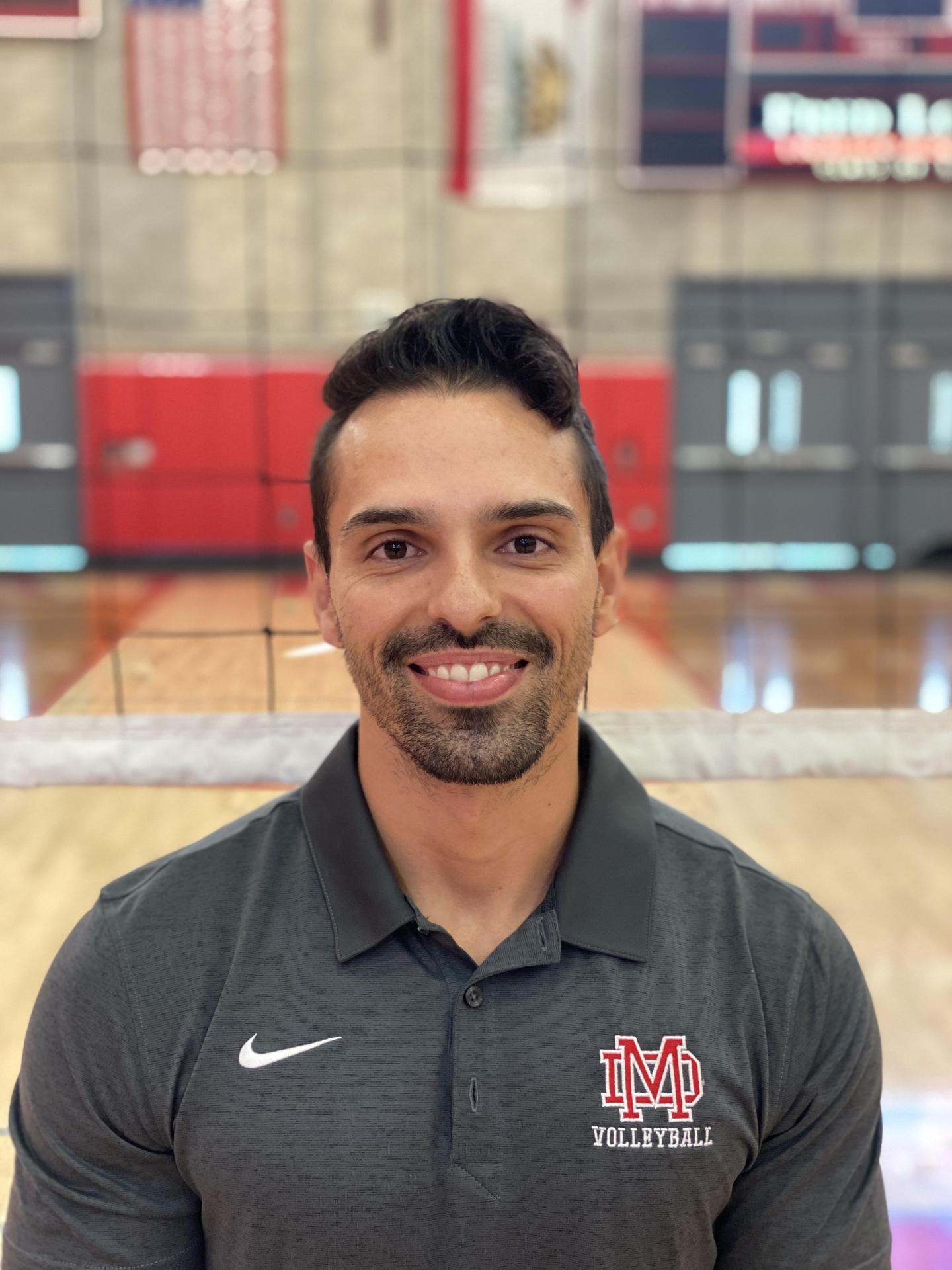 Having coached both girls and boys teams throughout his career, Curt Mahle is now entering his 14th year coaching club volleyball. Currently, he is a coach and director with PCH Volleyball Club located in Irvine, Ca. Curt has coached a wide variety of age groups ranging from 13’s to 18’s, accomplishing success in many different tournaments that are influential to the club season: a bronze medal in the SCVA Holiday Classic (2017), a bronze medal, silver medal and gold medal in the SCVA Boys Classic (2016, 2017,  2021 respectively), fifth place finish in the Junior Nationals Open Division (2016 and 2017), and a bronze medal in the Junior Nationals (2015). He also won silver and bronze medals at Junior Nationals while assisting the 13’s and the 15’s age division in 2016.

Outside of coaching club, Mahle has spent ten seasons coaching high school volleyball. He coached for five years at Edison High School in Huntington Beach, and 2 years for University High School in Irvine. During his second year at University High, coach Mahle became the Varsity Head Coach. During this time, the Trojans went from a last place finish in league to a 3rd place finish. This earned the team a spot in the playoffs for the first time in over 11 years. Curt has spent the last 4 years as the Boys Head Volleyball coach for JSerra. In his 2nd year as head coach the Lions obtained their best overall record in over a decade. This will be Curt's first year with the Monarchs. He’s excited join a prestigious staff at Mater Dei and help pass on his passion and knowledge to the younger generations.